During an acting class in Vancouver, Canada Julia had the opportunity to film a scene for her classmates. Since that moment she has felt compelled to continue to explore filmmaking. In 2008 she began making her first film, Son of the Soil a political documentary about her grandfather Dr. Eddison Zvobgo who is known as the President Zimbabwe never had. The film features an exclusive interview with the former Prime Minister of Zimbabwe Morgan Tsvangirai. Julia has a BA in Political Science with a Minor in African Studies from The University of British Columbia and an MA in Visual Ethnography and Global Economy & Culture from Leiden University. Her master’s thesis film, What it feels like: for a Girl (2017) is an auto-ethnographic inquiry into the position of girls in the Shona culture. Julia was born in Zimbabwe and raised in The Netherlands. As an Afropean she is always looking for new and creative ways to “make the invisible, visible”. She is the Founder and Editor-in-Chief for ‘Of Africa’ an online community for women of African descent and she volunteers as the Director of Communications & Development for Tariro House of Hope an NGO that transforms the lives of children in Zimbabwe. In addition to visual ethnography as a research method, Julia also specializes in photovoice and autoethnography. Her research interests are politics, kinship, African feminism, and intersectionality of race, class and gender. She is fluent in English and Shona and proficient in Dutch. 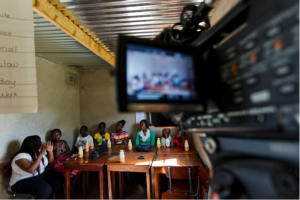